In a blatant theft of Jessica's idea, I have gathered together all of the socks that I have made that are still in the house. 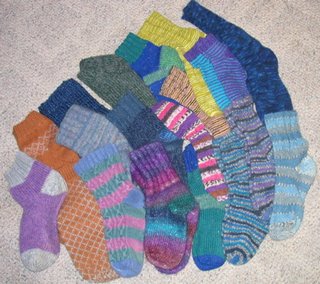 There are many pairs missing, I made lots of socks from Woolease before I knew about nylon, and the heels wore out. There are a few pairs here that have had a replacement heel. There is one pair that has suffered my lack of patients with hand washing and will now stand on their own, more of a boot than a sock. There is the pair that I made for my husband that were supposed to shrink down to fit. I didn't know about acrylic then either. I think they are in his work truck protecting his safety goggles. I've come a long way I think. 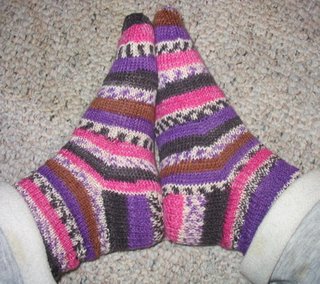 I finished this pair Monday night. I like them. They are way busy, and there is cable down the front and back that is sucked up by the stripes, but I know it's there. 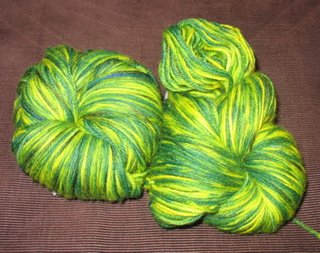 This yarn was really spotty when I dyed it and I wasn't sure how it would look. But I knit it up and liked it a lot, though that swatch picture didn't come out well. Rewinding it helped too, broke up the splotches.

To answer some of Lolly's questions on my sock history.
I knew how to knit, but hadn't done it in many years. I was bored and lonely in college and there were some girls in my dorm who knit in the lounge. So I went to the great craft store in town and bought two books, the interweave press socks book, and the knitters companion. I decided that socks were the only thing I was really interested in. Other projects seemed too big or too impractical. I just taught myself out of those books. My first heel took about 4 tries. I had to stop reading the directions as a whole and just do it one line at a time.

Almost all the socks I've made cuff down, a variation of the basic sock pattern in the interweave book. I was a die hard dpn person up until the last three pairs or so. Now I think that two circulars is the way to go. I've used a lot of different yarns, I don't have a favorite. I haven't spent the money on some of the most talked about stuff out here in blogland. I started dyeing my own to save some money, and to hopefully make some eventually. We'll see how that goes.
Posted by Sarah-potterknitter at 9:40 AM

Great collection of socks! :) And all that fire stuff in the last post, a little scarry! I had no idea that's how it worked!

So many socks! What is your favorite sock yarn? I made a pair and loved them and the heel and sole are gone! I want something that holds up.