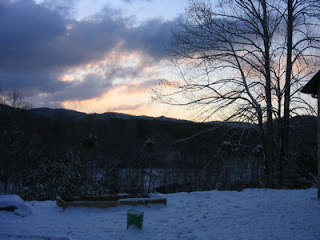 I don't see many sunrises. I'd rather sleep most mornings, but two inches of snow was enough to get me out of bed just after 7 on Saturday morning. Especially since that was the most snow we've had at one time all winter. 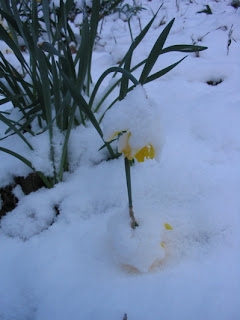 We faithfully have been covering the flower beds every night for now 7 nights in a row. The daffodils have to fend for themselves though. So far they are still perking up every morning. It's almost the end of their season anyway. It will be a few more days before the fate of the lilacs and azalias is known. And of course the flowers in the beds are looking pretty flat from the sheets, but they still have blooms, so I think they are doing fine. 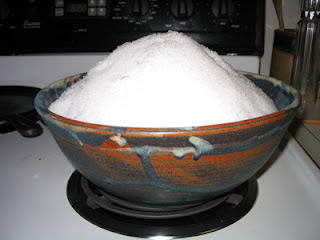 I have learned from years of experience that waiting for a reasonable time of day to eat your snow cream is futile, so after eating a bowl of cereal I made snow cream for breakfast. 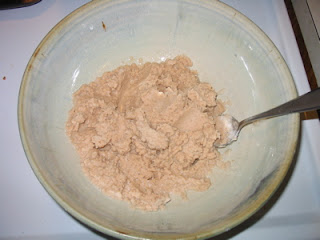 Usually it's not quite this mucky tan color, but I added a shot of chocolate syrup just to be totally decadent.
Never made snow cream? It's a tradition in my Dad's family along with banana pudding and oyster stew.
5oz can of evaporated milk
a few heaping teaspoons of sugar
half a cap full of vanilla
mix it up until the sugar is less gritty then dump in the snow and stir until it's pretty stiff. That bowl in the first picture, I used about half of it. It takes a lot of snow to make a little snow cream.

Seven years ago the weekend was bitter cold, windy and snowing, but Sunday April 9th turned out to be beautiful and only a little cold! 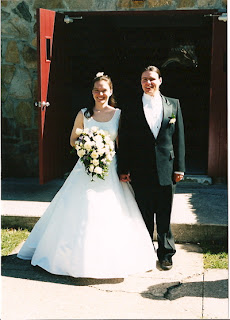 Posted by Sarah-potterknitter at 3:55 PM

It really does snow down there! ;)

Wow!! Congratulations on the baby and your anniversary!! We have missed seeing ya'll!! Hope to soon.