Just when we thought we'd baby proofed for the crawling person.... He raises the bar. Last week he started pulling up on my when I was sitting on the floor and had even gotten all the way to his feet a few times. But this morning I looked over to see this.... 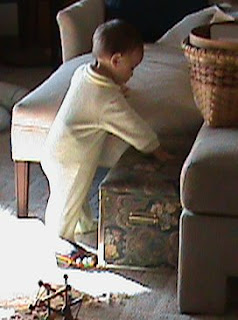 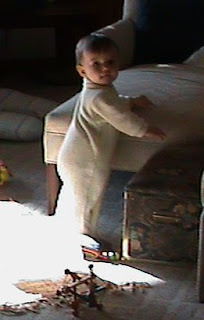 Somehow I haven't had much knitting time this week. Go figure. But I did finish this pair on the way to Asheville last Saturday. 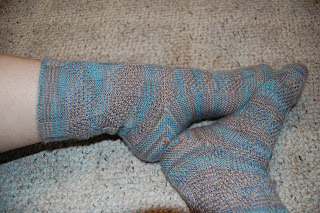 Posted by Sarah-potterknitter at 10:23 AM 3 comments:

When there's something to aim for he's off and crawling. But for casual moving around the house, he still prefers the rambling rolling sitting wiggling method that he's been using for a couple of weeks. Anything that's 8 inches off the ground has to be tasted on the way by. He's still not quick to pick something up and put it in his mouth, but fixed objects are a different story. Tooth number 5 is close to popping through, this one has taken forever. 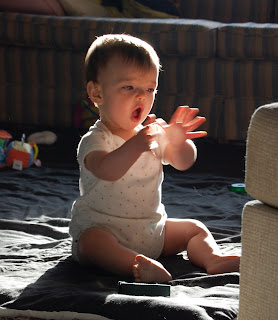 He learned to clap last week. Good thing since it entertained him for most of the car trip to Charlotte last weekend. 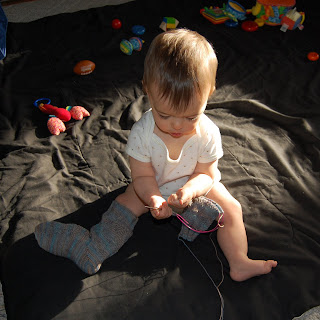 He's helped with the knitting some. 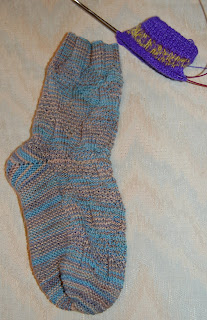 I'm almost finished with my Reversai socks, but of course I had to cast on the next Sock Madness pattern!
I have so many projects on the needles. It's a little crazy. 4 pairs of socks and 2 sweaters on my active list.
Posted by Sarah-potterknitter at 11:10 AM 1 comment: