We all survived the first year! Better than we could have expected. We have one great kid. He sleeps, he eats, he usually has a good reason when he cries. We've become parents. Before he was born Kevin would NOT hold a baby. Saturday evening he was handed a 5 week old and he didn't panic, he even had a conversation with the little one. Now that's a changed man!
On Saturday we had a big community party with another of the babies who had a birthday this week. 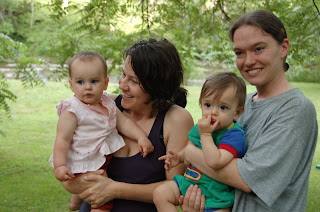 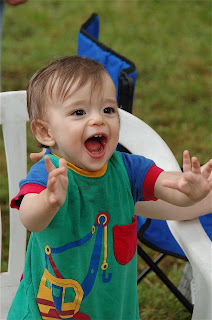 Then Sunday we had a family party with the good stuff. 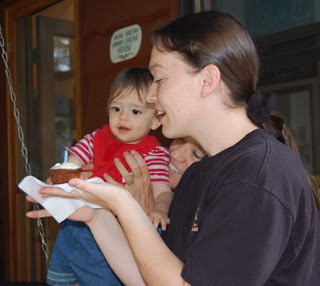 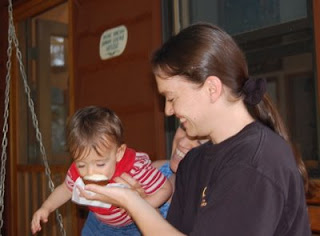 His first taste of sugar! Dove right in face first. He wasn't quite as enthusiastic as I had expected, but he was so full from a huge lunch that I can't blame him. He did really like the bite of ice cream I gave him later.
Posted by Sarah-potterknitter at 4:08 PM

happy bday to him and congrats to you. it seems like time is in some acceleration mode where my little ones and everone else's just keep growing so so fast.

his eyes, oh those eyes.

Happy "birthing" day Sarah!!
I just heard from my sarah and Gabe that they are off to visit a volcano and have been riding zip lines through the forest. My what stories they'll have to tell.

Happy Birthday to your little guy!